The HER2-low breast cancer subtype is a newly defined subset consisting of tumors that would have previously been considered HER2-negative based on an immunohistochemistry (IHC) assay and an in situ hybridization (ISH) assay. HER2-low tumors express low amounts of the HER2 protein, but not enough to be considered HER2-positive. HER2-low is defined as an IHC of 1+ or 2 with a negative ISH. Of the approximate 288,000 new cases of female breast cancer expected to be diagnosed in the U.S. in 2022,1 it is estimated that approximately 80-85% of patients would previously have been considered to have the HER2-negative subtype. Of those patients, about 60% would now be considered to have the HER2-low subtype.2

“In this post-hoc analysis, the outcomes seen in mBC patients whose tumors are considered HER2-low are consistent with the results of the three pivotal Phase 3 clinical trials,” said Dr. Takashi Owa, Chief Scientific Officer, Senior Vice President, Eisai Co., Ltd. “As the oncology community’s understanding of mBC continues to evolve, it’s important that we continue to evaluate the role of existing therapies in new contexts to contribute to the body of knowledge that is available to health care professionals.”

The post hoc analysis included data from three trials — eribulin vs. TPC (NCT00388726, EMBRACE trial/Study 305), eribulin vs. capecitabine (NCT00337103, Study 301), and eribulin vs. vinorelbine (NCT02225470, Study 304) in patients with locally recurrent or mBC who had prior lines of chemotherapy treatments (≤2 for Study 301; 2-5 for Study 304 and EMBRACE Trial/Study 305) including an anthracycline and a taxane. A total of 1,589 eligible patients were enrolled in the EMBRACE trial/Study 305, Study 301 and Study 304, and baseline characteristics were generally balanced between treatment arms in all studies. 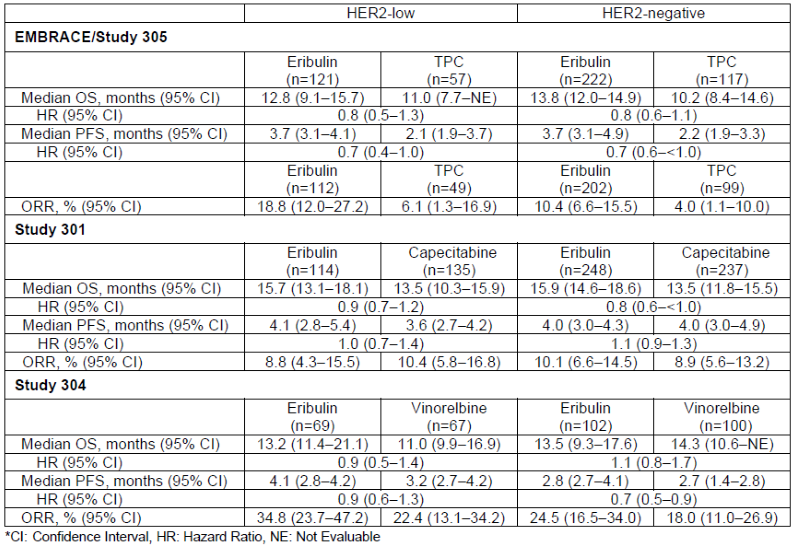