WITH SIMPLE OPERATION, APP RECORDS AND VISUALIZES SYMPTOMS TO SUPPORT COMMUNICATION BETWEEN PATIENTS AND DOCTORS

Eisai Co., Ltd. (Headquarters: Tokyo, CEO: Haruo Naito, “Eisai”) announced today that it has commenced the “PaDiCo” smartphone application service in Japan to support the lives of patients with Parkinson’s disease. The app is available for free download via the App Store (iPhone) or Google Play (Android).

The wearing-off phenomenon are diverse, including the motor symptoms such as tremor and muscular rigidity (stiffness), and the non-motor symptoms such as constipation, pollakiuria and sweating. Thus, it is considered to be difficult to understand wearing-off phenomenon. Understanding these symptoms at an early stage and providing patients with appropriate treatments may help control the progression of the disease.

The PaDiCo is equipped with a function that allows, with a simple operation, patients with Parkinson’s disease to record the time when wearing-off phenomenon appeared and visualize it on a weekly basis. In addition, the PaDiCo enables patients, in prior to visiting a medical institution, to score the fluctuations in their physical conditions and symptoms at that time and record it on the app. Recording the patient’s daily conditions is useful to patients for accurately relaying symptoms to their attending physicians. Furthermore, patients can send alerts or messages to pre-registered family members and close friends via SMS (Short Message Service) function of the PaDiCo by simply pressing the access button of the application displayed on the smartphone screen, for times such as their symptoms are severe. Besides, this app features an SOS display function, drug management, and useful information for patients in daily life such as a comprehensive exercise program recommendable for patients with Parkinson’s disease.

About key features of the PaDiCo App *This app is not a medical device.

The name PaDiCo comes from a combination of the underlined letters of Parkinson, Digital, and Communication. The app is equipped with various functions for patients with Parkinson’s disease; such as recording and visualizing off” time, recording their conditions and symptoms, an auxiliary function for sending messages, an SOS display function, and enabling users to receive useful information for a daily life such as a comprehensive exercise program recommendable for the patients with Parkinson’s disease.

1) A function that allows users with a simple operation to record “off” time and visualize it on a weekly basis, and a function to record the physical conditions and symptoms of patients with Parkinson’s disease

For the treatment of Parkinson’s disease, it is important to understand the patient’s symptoms at an early stage, and offer an appropriate treatment. With the PaDiCo app, users can record “off” time and visualize it on a weekly basis with a simple operation. Also, the app enables users to check the average data by month / year. In addition, the PaDiCo can be used to score the physical conditions and symptoms of patients daily and to record the fluctuations. These records will help patients for accurately relaying symptoms to and proceeding communication with the attending physicians. 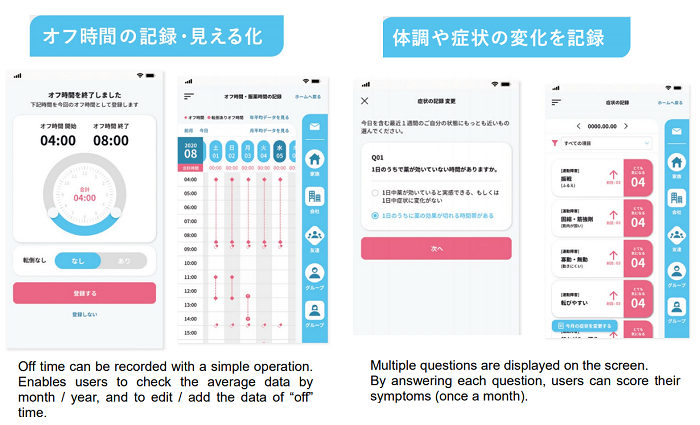 2. An auxiliary function for sending messages, an SOS display function, and a function to provide useful information for daily life of the patients with Parkinson’s disease such as recommended exercise training programs

The app enables users to send a pre-created message to registered family members and close friends via SMS function by simply pressing the access button on the smartphone screen, even when the symptoms of Parkinson’s disease are severe to patients. In addition, this app is equipped with a function that allows users to request an assistance in an emergency as needed by pressing the SOS button on the smartphone screen and presenting a screen with support methods to the surroundings. Also, the app enables users to record and manage their administration of registered medicines by simply scanning the two-dimensional code for the electronic version of a medication notebook into this application. Additionally, the app provides various useful information to patients with Parkinson’s disease for their daily lives, such as exercise training programs recommendable for patients. 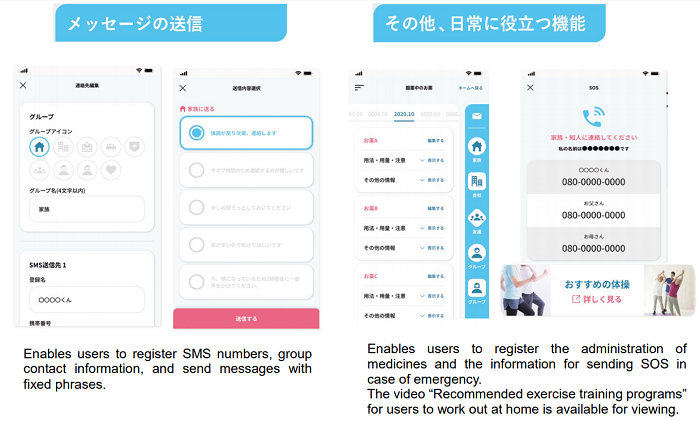 https://www.nanbyou.or.jp/entry/169 (available in Japanese only)