You are here: Home1 / News Release2 / THE UNIVERSITY OF TOKYO AND EISAI ANNOUNCE RESEARCH COLLABORATION FOR THE DEVELOPMENT AND DRUG DISCOVERY OF TARGETED PROTEIN DEGRADATION TECHNOLOGY

The University of Tokyo (President: Makoto Gonokami, “The University of Tokyo”) and Eisai Co., Ltd. (Headquarters: Tokyo, CEO: Haruo Naito, “Eisai”) announced today a collaboration aiming for the development and drug discovery of targeted protein degradation technology has been created, with the establishment of a social cooperation program, “Protein Degradation Drug Discovery”. The research time span will last five years from October 1, 2020 to September 30, 2025.

The social cooperation program is established and operated based on funds of private organizations dedicated to conducting research in collaboration with the University of Tokyo regarding shared issues of high common concern.

The “Protein Degradation Drug Discovery” course is to be established within the Graduate School of Pharmaceutical Sciences, the University of Tokyo. Dr. Mikihiko Naito, Former Director of the Division of Molecular Target and Gene Therapy Products, National Institute of Health Sciences, has been inaugurated as a project professor for this program and will lead research with protein degradation technology including SNIPER. This research will combine the world’s most advanced ubiquitin-proteasome research as conducted in the graduate school with drug discovery knowledge fostered by Eisai, for the development of new protein degradation technology towards proteins targeted by drugs and the promotion of drug discovery research based on this technology. In addition, through this research, the course will educate and train the next generation of leaders in this research field.

Targeted protein degradation is a series of technologies in which precisely designed compounds force target proteins into proximity with E3 ubiquitin ligase and apply the ubiquitin-proteasome system to induce degradation of the target proteins. The technology provides a means of creating medicines for not only conventional targets such as specific enzymes and receptors, but also disease-related proteins for which drug discovery up to this point has been difficult. Through the development of this technology and drug discovery, the University of Tokyo and Eisai aim to provide new treatment options to patients for which treatment options were previously limited.

[Notes to editors]
1. About SNIPER
SNIPER (Specific and Nongenetic IAP-dependent Protein Eraser) is a compound which utilizes the ubiquitin-proteasome system to degrade target proteins. This compound is a “hybrid compound”, and consists of a moiety that binds to the target protein and a moiety that binds to E3 ubiquitin ligase (IAPs) with an appropriate linker. Designing this compound requires advanced medicinal chemistry and cutting-edge structural biology. When the SNIPER compound brings the target protein and E3 ubiquitin ligase (IAPs) into proximity (Step 1 in the chart below), ubiquitin as a protein degradation tag transfers from the E2 ubiquitin conjugating enzyme to the target protein (2) for recognition of the protein by the proteasome and subsequent degradation (3).

Conventional small-molecule inhibitors bind to the active moiety of target enzymes, and express pharmacological activity by inhibiting the activity thereof. On the other hand, because SNIPER exhibits pharmacological properties by target protein degradation as described above, it is not only expected to exhibit different pharmacological activity from small-molecule inhibitors; it is also predicted to target proteins that do not have enzymatic activity. Similar technologies include PROTAC (PROteolysis TArgeting Chimeras) and Degronimid. 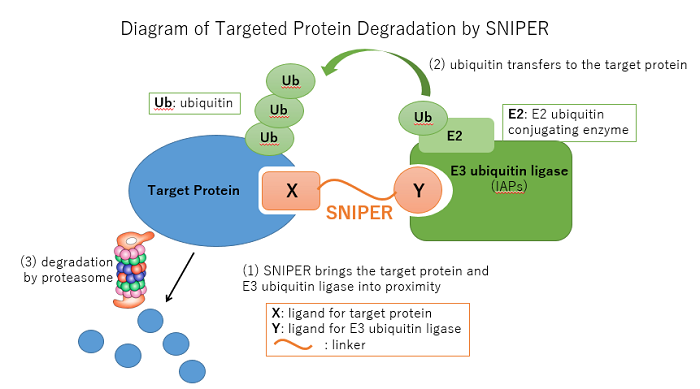 2. About the Ubiquitin-Proteasome System
The ubiquitin-proteasome system is one of the naturally occurring mechanisms for controlling the degradation of unneeded proteins, and is in control of critical movements relating to the preservation of life including cell cycle, transcription regulation, and signal transmission. When ubiquitin as a protein degradation tag connects to unneeded proteins through agents such as the E3 ubiquitin ligase, it marks the protein for recognition by the proteasome for subsequent degradation. In recent years, the relation between the ubiquitin-proteasome system and major human diseases including cancer and neurodegeneration is becoming evident.