During the address, Dr. Naito expressed his appreciation for all the government officers and guests attending the inauguration ceremony for the new Suzhou plant of Eisai China. With the human health care (hhc) corporate philosophy, the quality management policies of Eisai are “The quality of every single tablet, capsule and ampoule that we produce is integral to the life of the patient”, aiming to contribute to Chinese patients. The construction of the new oral solid dose production facility is to strengthen the stable supply system, and to further expand the contribution to Chinese patients. In the further, Eisai will bring in new technologies, develop new dosage forms and make the new plant a global manufacturing site spreading innovation. Meanwhile, Dr. Naito emphasized that Eisai will commit to the research and development of new drugs, and bring into China more and better drugs like Lenvatinib (product name: Lenvima®), a first-line treatment for hepatocellular carcinoma (HCC). Eisai gives first thought to patients and their families, and seeks to contribute further to increasing the benefits provided to them.

As one of the main plants, Suzhou Plant, in addition to satisfy the needs of Chinese market, will also provide drugs for 23 countries and regions in East Asia, South East Asia, Middle East, Central and South America, Europe, and etc.. In recent years, Eisai Suzhou Plant was awarded the “Great Suzhou Best Employer”, “Top 20 Tax Payers”, ”Top 10 Enterprises in Headquarters Economy”, “Top 10 Enterprises of Foreign Regional Headquarters”, and etc., successively. The annual sales volume of Eisai China remains in the first position among the Japanese pharmaceutical enterprises in China. 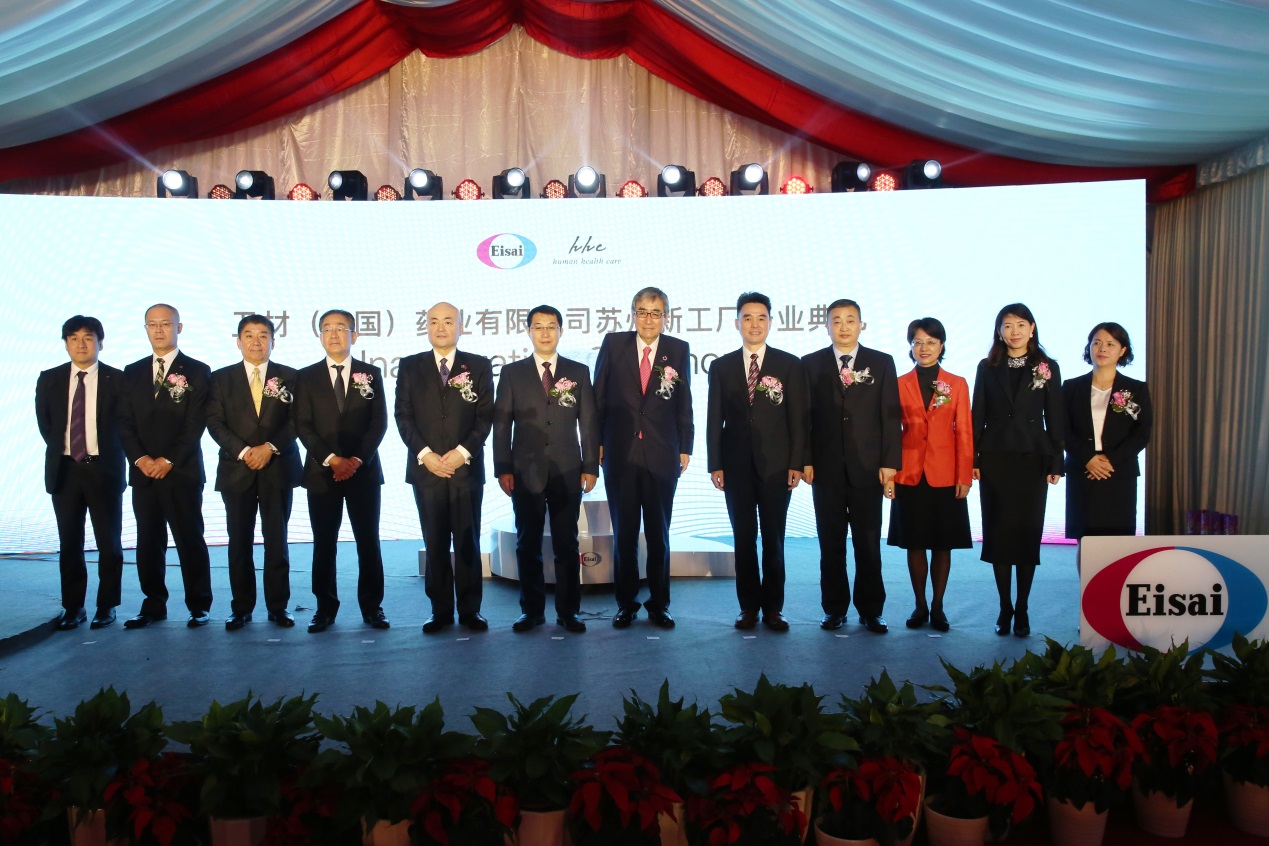 Currently, Eisai has established 3 companies in Suzhou Industrial Park, namely ECI, with its Suzhou plant as the most important manufacturing site in China and awarded “Major Taxpayer in Suzhou” for many successive years since its establishment in 1996, Eisai (Suzhou) Trading Co., Ltd. (EST), established in 2010 responsible for Eisai’s logistics, warehouse and sales in China, and Eisai China Holdings Ltd. (ECHL), which was set up in 2014, with investment increased in the next year. ECI and EST are under the control of ECHL. In 2015, Eisai (Liaoning) Pharmaceutical Co., Ltd. was officially established through the full takeover of a local generic drug manufacturer. Currently, the total registered capital of Eisai in China is US$108.54 million, specializing in neurology, oncology and gastrointestinal areas, with 18 pharmaceutical brands in China’s Market. Of the 18 brands, 8 ones are locally produced, and the other 5 ones are sub-packaged. Until 2017, Eisai has nearly two thousand employees in China, and more than one thousand of them are medical representatives taking activities mainly in 4,800 hospitals in over one hundred cities with an urban population of more than one million. In 2017, the annual sales volume of Eisai China remained in the first position among the Japanese pharmaceutical enterprises in China.

Eisai’s business operations in China are one of its core businesses which are third-largest in scale after Japan and the United States. With the full-scale commencement of operations at the new Suzhou plant, Eisai seeks to strengthen its in-house domestic production system in China and expand its stable supply chain of high quality pharmaceuticals, contributing to increasing the benefits to patients and their families in China.