There will be an oral elenbecestat presentation which will include additional data on the Study 202 results that were initially presented in July 2018 in patients with mild cognitive impairment and mild to moderate Alzheimer’s disease. Elenbecestat is currently being investigated in two ongoing Phase III clinical studies (MISSION AD1/2) in patients with early Alzheimer’s disease.

Meanwhile, for aducanumab, there will be several presentations on late breaking abstracts  including the results of analyses of cumulative safety data from the Phase Ib study PRIME long-term extension study of patients with early Alzheimer’s disease  initially announced in August 2018. Currently, Eisai and Biogen are advancing two Phase III clinical studies (ENGAGE/EMERGE) on aducanumab.

In addition, there will be a presentation on data from a first-in-kind Phase II clinical study (Study 202) on the investigational sleep-wake regulation agent lemborexant in Alzheimer’s disease patients with irregular sleep-wake rhythm disorder (ISWRD). Discovered by Eisai, lemborexant has been jointly developed with Purdue Pharma L.P. (Headquarters: Connecticut, United States, “Purdue Pharma”) since August 2015.

Eisai is aiming to realize prevention and cure of dementia through a holistic approach to dementia drug discovery research based on a foundation of over 30 years of experience of drug discovery activities in the area of Alzheimer’s disease / dementia. Eisai is striving to create innovative medicines as soon as possible in order to further contribute to addressing the unmet medical needs of, as well as increasing the benefits provided to, patients and their families. 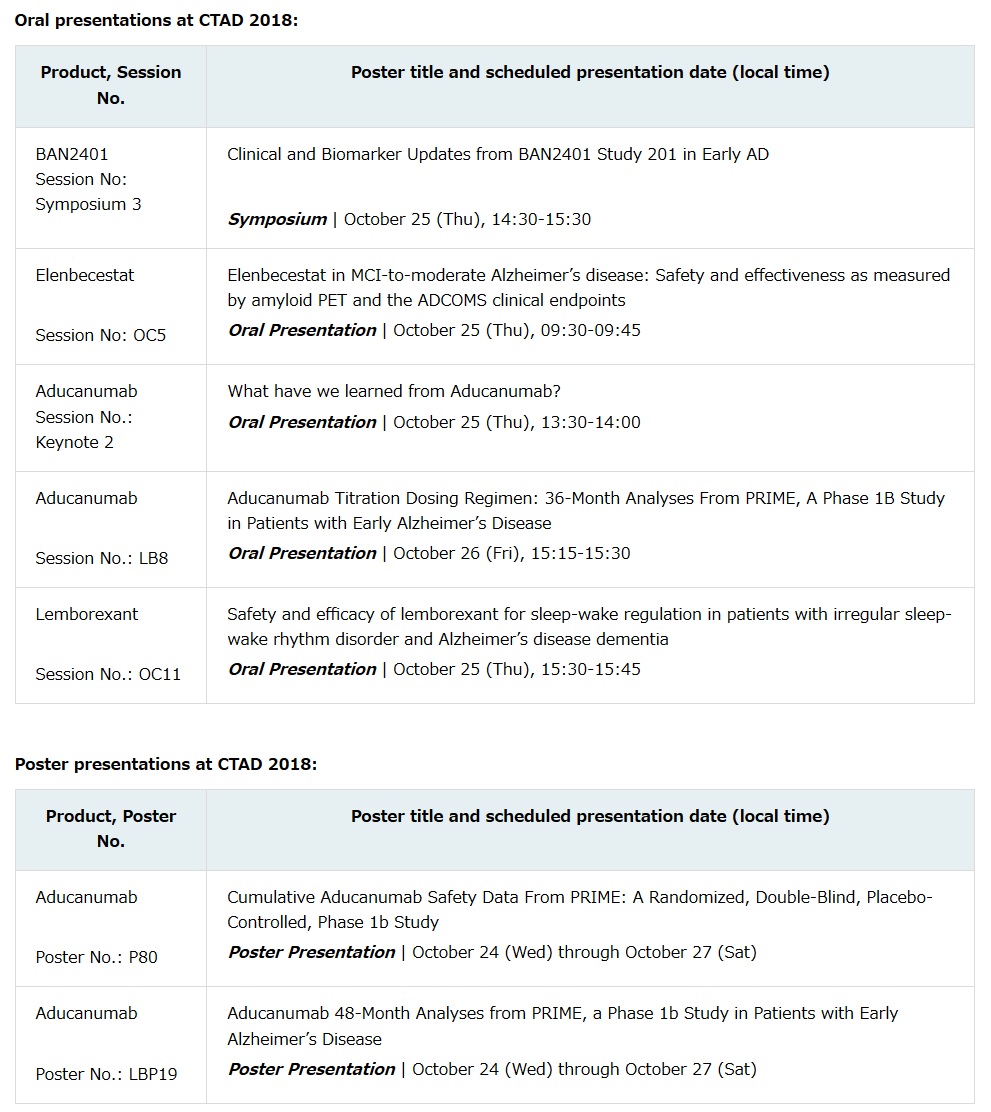 [Notes to editors]
1. About BAN2401
BAN2401 is a humanized monoclonal antibody for Alzheimer’s disease that is the result of a strategic research alliance between Eisai and BioArctic. BAN2401 selectively binds to neutralize and eliminate soluble, toxic Aβ aggregates that are thought to contribute to the neurodegenerative process in Alzheimer’s disease. As such, BAN2401 may have the potential to have an effect on disease pathology and to slow down the progression of the disease. Eisai obtained the global rights to study, develop, manufacture and market BAN2401 for the treatment of Alzheimer’s disease pursuant to an agreement concluded with BioArctic in December 2007.

2. About elenbecestat (generic name, development code: E2609)
Elenbecestat is an oral BACE (beta amyloid cleaving enzyme) inhibitor currently being investigated in Phase Ⅲ clinical studies for Alzheimer’s disease discovered by Eisai. By inhibiting BACE, a key enzyme in the production of Aβ peptides, elenbecestat reduces Aβ production, which is thought to lead to a reduction in amyloid plaque formations caused by the aggregation of toxic oligomers and protofibrils in the brain. Currently, two global Phase III clinical studies (MISSION AD1/2) of elenbecestat in early Alzheimer’s disease including mild cognitive impairment (MCI) due to AD/Prodromal AD and the early stages of mild AD are underway. In addition, the U.S. Food and Drug Administration (FDA) has granted Fast Track designation for the development of elenbecestat, a process to facilitate development and expedite review by FDA for drugs deemed as having potential to treat serious conditions and addressing unmet medical needs.

3. About Aducanumab (BIIB037)
Aducanumab is an investigational compound being developed for the treatment of Alzheimer’s disease. Aducanumab is a human recombinant monoclonal antibody (mAb) derived from a de-identified library of B cells collected from healthy elderly subjects with no signs of cognitive impairment or cognitively impaired elderly subjects with unusually slow cognitive decline using Neurimmune’s technology platform called Reverse Translational Medicine (RTM). Biogen licensed aducanumab from Neurimmune under a collaborative development and license agreement.

Aducanumab is thought to target aggregated forms of beta amyloid including soluble oligomers and insoluble fibrils which can form into amyloid plaque in the brain of Alzheimer’s disease patients. Based on pre-clinical and Phase 1b data to date, treatment with aducanumab has been shown to reduce amyloid plaque levels.

4. About the Joint Development Agreement between Eisai and Biogen for Alzheimer’s Disease
Eisai and Biogen are widely collaborating on the joint development and commercialization of Alzheimer’s disease treatments. Eisai serves as the lead in the co-development of elenbecestat, a BACE inhibitor, and BAN2401, an anti-Aβ protofibril antibody, while Biogen serves as the lead for co-development of aducanumab, Biogen’s investigational anti-Aβ antibody for patients with Alzheimer’s disease, and the companies plan to pursue marketing authorizations for the three compounds worldwide. If approved, the companies will also co-promote the products in major markets, such as the United States, the European Union and Japan.

5. About Lemborexant (generic name, development code: E2006)
Lemborexant, a dual orexin receptor antagonist, is Eisai’s in-house discovered and developed small molecule compound that inhibits orexin neurotransmission by binding competitively to the two subtypes of orexin receptors (orexin receptor 1 and 2). In individuals with sleep disorders, it is possible that the orexin system that regulates sleep and wakefulness is not functioning normally. During normal periods of sleep, orexin system activity is suppressed, suggesting it is possible to purposefully counteract inappropriate wakefulness and facilitate the initiation and maintenance of sleep by interfering with orexin neurotransmission. Therefore, Eisai and Purdue have been developing lemborexant as a treatment for multiple sleep disorders.

In addition, a Phase II clinical study of lemborexant in patients with irregular sleep-wake rhythm disorder (ISWRD) and mild to moderate Alzheimer’s dementia is underway.